Jonathan was born in Leeds in 1959. As a child he always loved to paint and stood in awe of his father, a professional artist. He always felt he was destined to follow in his father’s footsteps, but after leaving school found himself working in a variety of jobs, finally finding a creative position as an interior designer.

However, he knew that this was not the life for him and eventually resigned from his job to go travelling, financing his journey with money raised from selling his work along the way. The realisation that he was able to sell his work so easily filled Jonathan with confidence and he returned home to Yorkshire to open a gallery which he ran for six years.

Jonathan spent more and more time developing his own painting and in 1999 was elected a Fellow of the British Society of Painters and the International Guild of Artists, and in 2003 he was shortlisted for the Fine Art Trade Guild award for Best Up and Coming Artist. His work is held in private collections and galleries throughout the UK, Europe and the USA, and his celebrity collectors include Dawn French and Lenny Henry. 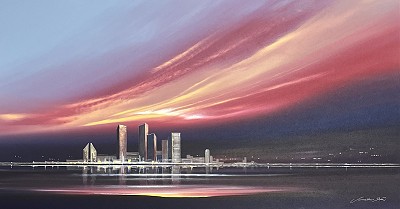